In this article: Find out the best methods for preserving peppers from your vegetable garden.

If you have a backyard vegetable garden you are sure to have a crop of peppers and probably at least a couple different types of pepper plants too.

So once you’ve eaten your fill of fresh peppers, how do you preserve them so you can enjoy them throughout the year?

Below is a list of 9 different methods of preserving peppers. Some use hot peppers, some use sweet peppers, some it doesn’t matter what variety of peppers you use!

How to Preserve Peppers At Home

Let me first start by saying that peppers are not usually canned by themselves. You can water bath can products made from peppers but not alone. And even if you could, preserving peppers by canning would most likely result in some very soft, mushy peppers.

But here are 9 ways you can preserve peppers for the winter.

Before we get started, a word of warning. If you are cutting hot peppers for preserving, wear gloves. I speak from personal experience that burns from hot peppers are NOT FUN!

Freezing pepper is my favorite way to preserve peppers from my garden. It’s quick, simple, and no fuss.

Simply cut your peppers in strips or dices and remove the seeds. Then place them in a freezer bag. Some people prefer to place them in a single layer on baking sheets for freezing first, but I feel like this is an unnecessary step.

Squeeze out as much air as possible, or use a food saver or vacuum sealer to prevent freezer burn.

Then just stick them in the freezer and use as needed.

Frozen peppers work great in most dishes- sautees, soups, on pizza, you name it.

If you are saving both hot and sweet peppers, be sure to label them clearly! 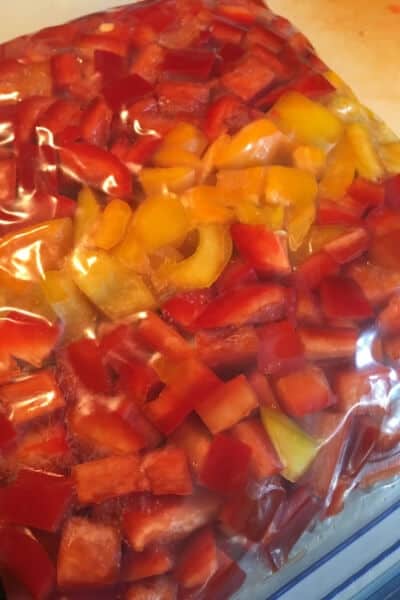 Peppers cut and ready to freeze!

Preserving peppers by dehydrating is another easy way to preserve your pepper harvest.

You can use an electric dehydrator, air dry, or oven dry your peppers.

If I am dehydrating diced peppers, I usually use my electric dehydrator. I have, and highly recommend, an Excalibur dehydrator. Check out my Dehydrator Buying Guide to find the best choice for you.

Hot peppers, I usually dry whole either by stringing them up and air dry or set them whole in my dehydrator. You can powder the peppers once they are completely dry for your own homemade cayenne pepper powder for spicing dishes! 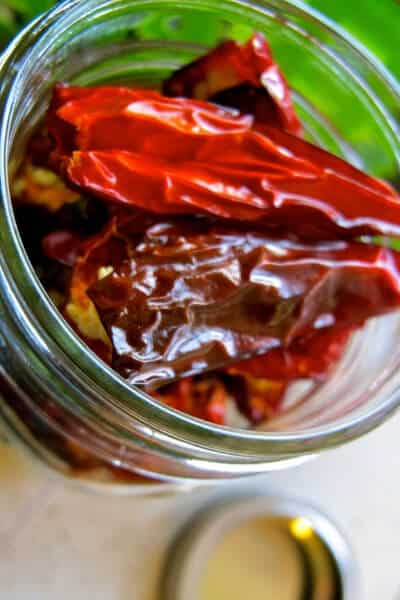 Fermenting is a great way to preserve a lot of foods, including peppers.

Fermenting uses microorganisms such as yeast, bacteria, or other cultures to convert carbohydrates and produces massive health benefits in the process.

Fermenting does take a bit longer than other methods of preservation, but it tends to produce a product with a longer shelf life and lots of healthy benefits.

Pepper jelly is a common way to preserve peppers. This is a sweet jelly, but not exactly a peanut butter and jelly sandwich kind of jelly.

Here are a couple Pepper Jelly recipes for you to try: 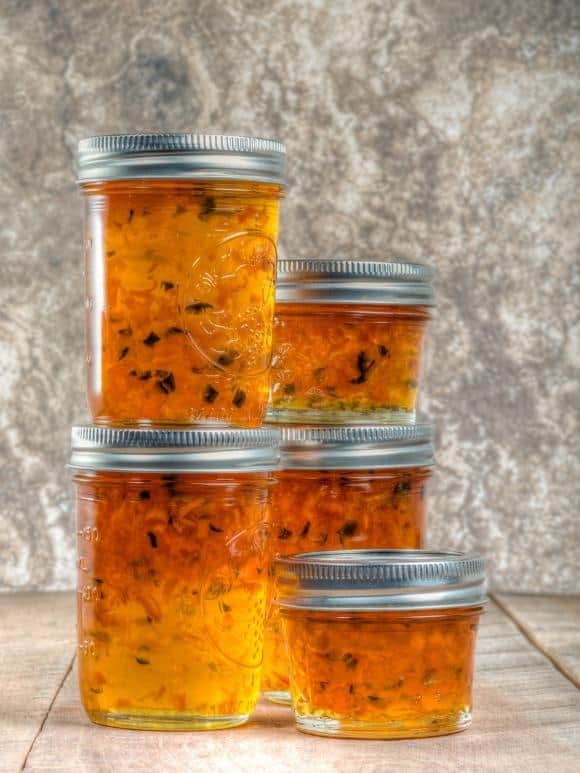 I love making pickles with my cucumbers, but many other vegetables and fruits that can’t be water bath canned on their own can be preserved and canned by pickling.

Pickling relies on the acidity in white vinegar to do most of the preserving, so even low acid foods such as peppers can be canned using a boiling water bath canner.

Practical Self Reliance has a great Pickled Pepper Recipe to try. 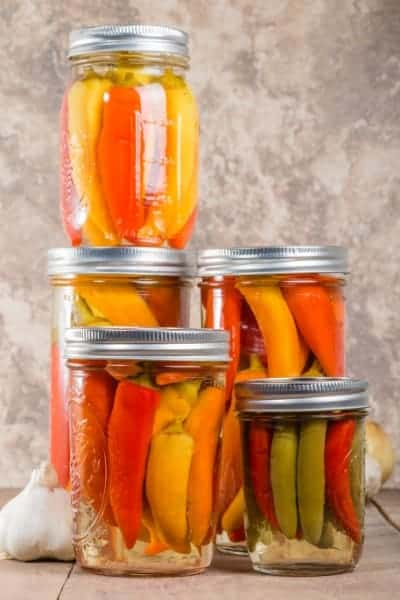 While these don’t always use a ton of peppers, you can make a dent in your pepper harvest by making sauces and salsas.

Ajvar is a red pepper sauce that can be used similarly to marinara sauce. It’s really tasty too! Ajvar is made with garlic, eggplant and lots of sweet, roasted red peppers! Here’s the recipe: How to Make Ajvar (Red Pepper Sauce). It freezes well too.

Many tomato salsas are filled with lots of hot and sweet peppers. If you aren’t canning you have more freedom to deviate from the recipe and add in more.

Most canned tomato sauces don’t have peppers, but I like to throw some peppers in my roasted tomato sauce recipe for extra flavor and nutrients. I freeze the sauce, so I don’t have to worry about acidity.

These little pepper rings are sweet, spicy, and just delicious!

Some people remove the seeds, but there’s not really any point. So just slice the peppers, seeds and all, and save yourself some time.

Vinegar and sugar allow you to use a water bath canner to preserve these peppers.

Be sure to use gloves when slicing the peppers and follow a tested recipe like this one: Candied Jalapenos. 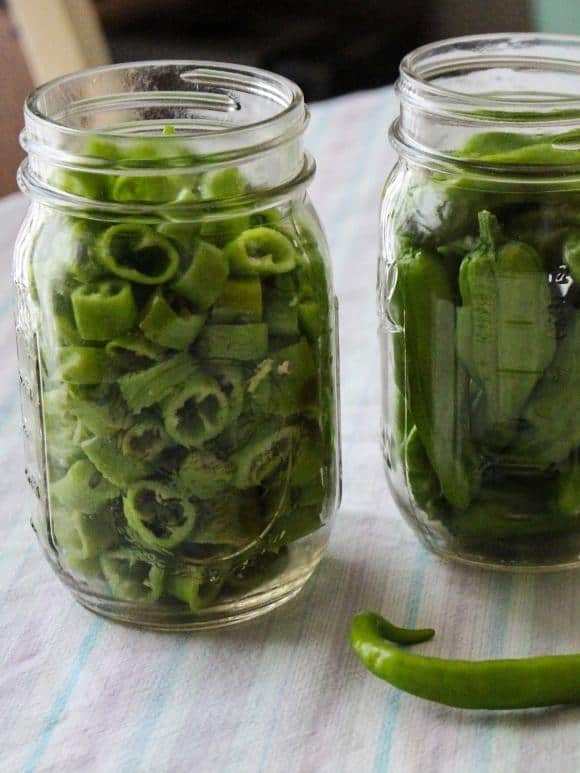 Cucumber relish (here’s my recipe) is delicious, but you can make pepper relish too!

A food processor will make chopping the pepper small enough a lot easier and save you a lot of time.

Want to preserve peppers by making pepper relish? Check out these recipes for both hot and sweet varieties: 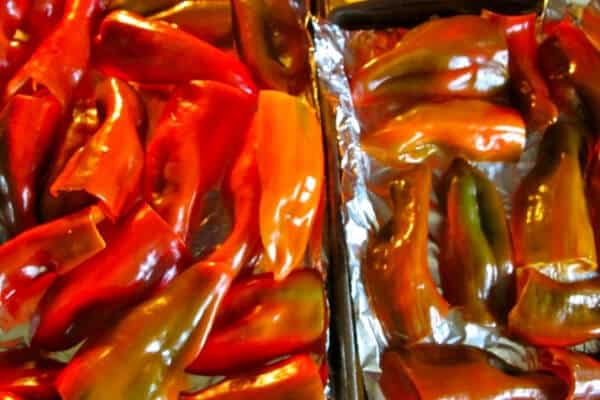 Preserving peppers in oil is an easy way to make your peppers last just a little bit longer.

To preserve peppers in oil you first roast the peppers until starting to blacken. Remove the skins and then place your prepared peppers in sterile jars and cover with pure olive oil. This won’t preserve your peppers long term, but it will extend the life of your peppers a little bit longer.

Here are some oil preserved pepper recipes to try:

Or this one is sort of a hybrid between preserving with vinegar and oil: Home Canned Hot Peppers Marinated in Oil.

Ready to fill your freezer or pantry with preserved peppers?  Learn how many peppers you’ll get per plant and how to maximize your pepper yield!

How to Preserve Eggplant