How to Control Cucumber Beetles Organically

Cucumber beetles may seem to be a small problem- after all they can’t fall a plant in hours like the squash bug can- but cucumber beetles can actually be bad news for your garden!

Cucumber beetles are small yellow and black beetles that are either spotted or striped (more on that in a minute!). They are only about 1/4 of a inch long, and more of an oval shape than the round shell of a ladybug.

The larva and adults can feed on the roots, leaves, and fruits of plants in the cucurbit family (cucumbers, melons, squash, pumpkins). Most of the time these beetles will not kill your plant- but there is a hidden danger when it comes to cucumber beetles- they carry diseases. And these diseases can harm, or even kill, your plants.

Striped cucumber beetles lay their eggs at the base of the plants- which means that the roots suffer the most damage from the larva.

Both types will feed on the plants causing stunted growth, less fruit, and disease like bacterial wilt. 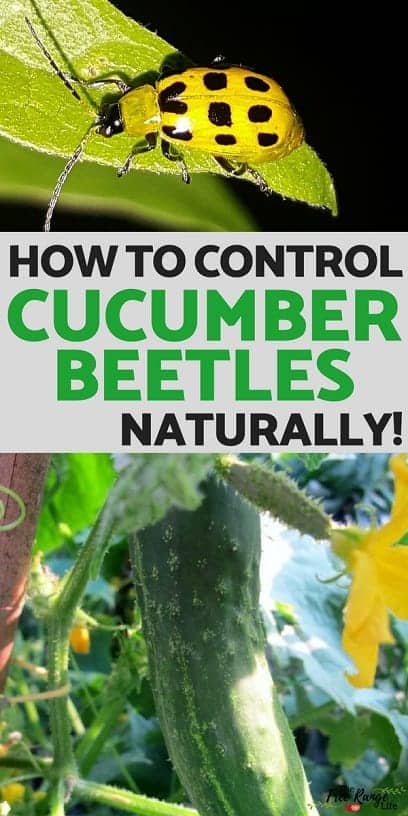 There are few different plants you can try to interplant with your cucumbers to repel the cucumber beetle. These include flowers such as nasturtium and marigold. Or vegetables like radishes and corn.

You can read more on the best plants to plant with your cucumbers, and what not to plant, on my article The Best Companion Plants for Cucumbers in the Backyard Garden

Your timing can go along way in how many pests you deal with in your garden. Learning the lifecycle of a particular pest can help you decided when the best planting time is for your area.

When it comes to cucumber beetles, many times plants that are planted in the fall and spring do better than ones planted in the middle of the growing season.

Also, instead of planting seed directly in the ground, start your cucumbers in pot. Cucumber beetles attack small, weak plants, so transplanting larger, strong plants into the garden will give your cucurbits a strong start. 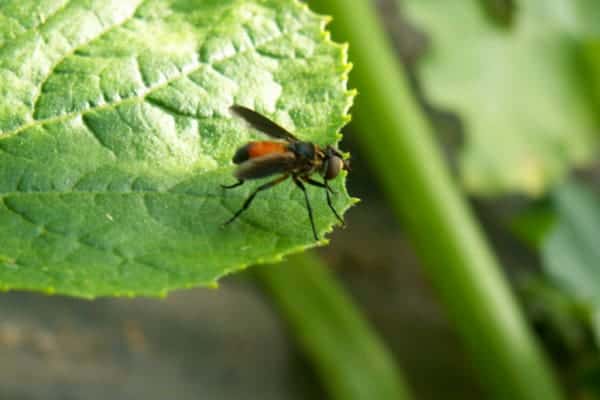 Ground beetles can also feed on cucumber beetles- so don’t squash those!

And if you are scared of spiders, be sure to leave the wolf spider alone! They can give a good deal of help in getting rid of cucumber beetles- plus the cucumber beetles tend to steer clear of areas that have a lot of wold spiders.

Insect eating nematodes can help fight cucumber beetles (and fleas!) so you can add them to your arsenal as well. You can even buy them on Amazon!

Related Reading: How to Get Rid of These Common Garden Pests Naturally!

Yellow sticky traps can help control the number of adult cucumber beetles in your garden. The cucumber beetles are drawn to the color yellow so simply hang the traps around your plants and they will fly onto them and stick.

Hand picking isn’t at all effective for trapping cucumber beetles- they are quick flying little things! But you can try vacuuming or otherwise sucking up the beetles on your plants if you only have a small area to cover.

Floating row covers, especially on early, young plants, can do a lot towards protecting your cucurbit plants. You cover the plants until they begin to flower, giving them a very long head start in getting strong enough to fight off cucumber beetles.

Just don’t forget to remove the covers at flowering- the pollinators need access to the plants or you won’t get any fruits! 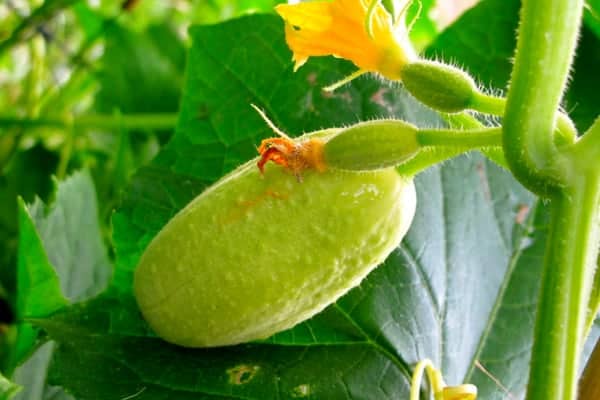 More Tips on Handling Cucumber Beetles in the Organic Garden

Many mulches, like straw or wood, is the perfect habitat for wolf spiders. And I already talked about why you want wolf spiders!

Organic mulches that are high in organic matter and microorganism makes for stronger plants and the cucumber beetles will be less likely to hangout in your garden.

Plastic mulch, especially ones that are reflective can also repel cucumber beetles.

You can also try planting resistant varieties of cucurbits. For example, cucumber beetles don’t like burpless cucumber as much as other types. They also tend to prefer zucchini-type squashes over others.

It’s also important to choose varieties that are also somewhat resistant to the bacterial wilt carried by the cucumber beetles.

Related: How to Use Trap Crops in the Garden to Deter Pests

Because cucumber beetles overwinter in the soil where the previous year’s crop was planted, crop rotation can help control the cucumber beetles in your garden. Moving your cucurbits to a new location will prevent newly hatched larva from attacking the roots of the new year’s plants.

The farther distance you can put between last year’s and this year’s crop the better. Of course, cucumber beetles are highly mobile and will fly to your new planting area, but crop rotation reduces the larva damage and combined with all of the other tips, is just one more step to controlling cucumber beetles in your garden.

7 Tips to Growing the Best Cucumbers

5 Ways to Trellis Your Cucumber Plants