It’s the number one question when it comes to guinea fowl. I get asked over and over again.

Guineas are touted as being great for pest control. And not just insects, but small rodents and yes, even snakes.

Maybe you read my article on 5 Reasons NOT to Own Guineas and are still weighing the pros and cons.

And you want to know… Is it true? If you get a flock of guineas will they eat the snakes on your property?

The Answer? A disappointing….

Here’s what I, and the homesteading community, can tell you for sure about guineas and snakes:

A flock of guineas will disrupt the snake’s habitat and deter them from coming around. Snakes like it calm and quiet. Guineas are neither.

Guineas will notice a snake, but more often than not the flock, especially if it’s a young flock, will just surround the snake and “discuss” it, inspect it, but not eat it.

The smaller the snake the more likely your guineas will be to eat it. A smaller snake appears more like a large worm and they will peck at it. Chickens will do the same.

You can train your guineas to eat snakes. I don’t have any experience with this, but if you have a nice trainable flock. Give it a shot!

Similar to cats, your guineas might play with the snakes they find. They may give them a peck or two, maybe chase them a bit. But probably not peck it to death. Though if its not killed, the snake will probably move on its way after an encounter with guineas.

Guineas don’t have the greatest of survival instincts. So, you might have trouble keeping them around long enough to actually eat any snakes.

If you have a snake problem, guineas could be your answer. So could a good flock of chickens or turkeys. Or a good cat. Our barn cats love snakes.

So keep weighing the pros and cons on adding guineas to your homestead. And read up on how to raise guineas for beginners. Of course, if you get them and they don’t work out, you can always butcher them for the freezer! 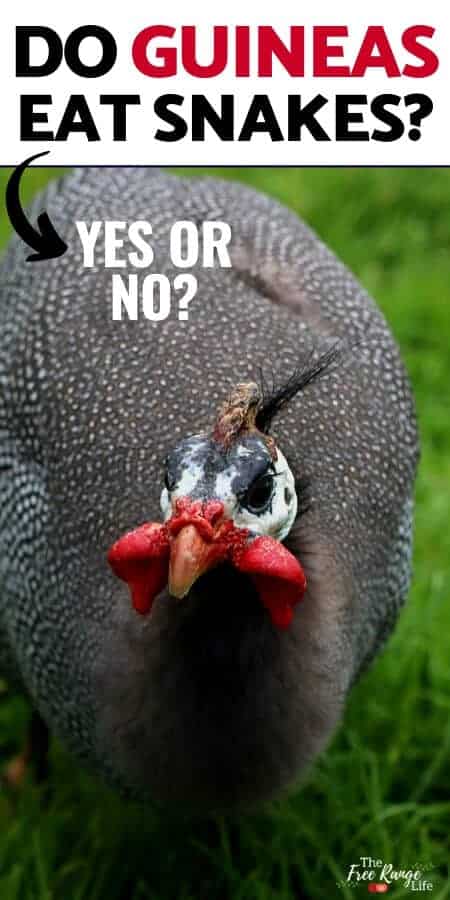